Emergency assistance to meet the vital
needs of displaced populations

Although the number of security incidents linked to the various armed forces in Bambari itself dropped sharply between 2016 and 2017 (from 113 to 41 according to INSO), it did not decrease as significantly in the Ouaka, where the security situation has deteriorated in recent months, notably on the Ippy axis due to particularly serious conflicts in the villages of Tagbara (PK 70) and Seko (PK 60). These events caused population movements in the bush, towards Maloum, Ippy, and Bambari and pushed people who had found refuge at the religious sites of Seko and Tagbara to move to the sites of Bambari. 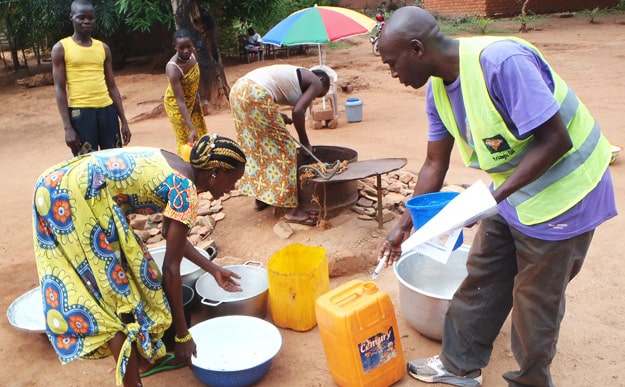 TGH is focusing its intervention on the emergency needs of the displaced populations already present in Bambari and those affected on the Seko site (PK 60 of Bambari Ippy axis), following the period of conflict in March 2018.

The access to safe drinking water in IDP camps and along the roads is made difficult both by the scarcity of water resources and their remoteness. In order to ensure the distribution of drinking water for the 63,481 displaced people currently present in the camps and in host families in Bambari and the 5,000 people present on the two Seko sites, TGH is maintaining its water, hygiene and sanitation (WASH) efforts. In particular by extending the operation of the water treatment unit and ensuring the supply of several sites via water trucking, but also by operating five boreholes equipped with submersible pumps in IDP camps or in the districts of Bambari. TGH also maintains the operation of the 29 chlorination points in Bambari.

With regard to sanitation needs, TGH continues to maintain its emergency sanitary areas in Séko and Bambari - made from local materials that are accepted by the population and easy to obtain - in order to allow better resilience of superstructures. TGH is calling on the community to provide a proportion of the coating required for construction.

In parallel, in collaboration with health centres, TGH ensures the implementation of hygiene awareness sessions for displaced populations, with priority given to women and children.

A WASH emergency stockpile has been established; which would suffice to cover the needs of 7,500 people and to cope with a possible increase in needs.