Multisectoral project for local development in the North-East of
the Central African Republic, "Iboungbi".

The préfectures of Vakaga and Bamingui-Bangoran are located along the border with Chad and Sudan. State services gradually withdrew from the North-East due to the conflicts and as the crisis unfolded (armed conflicts, food crises and degradation of natural resources). Nevertheless, the security context has improved in recent years, allowing the return of some of the administrative authorities (prefects and sub-prefects) to Bamingui-Bangoran, as well as some deconcentrated services and state agencies, even though the cruel lack of resources and infrastructure needed by these authorities and the various service managers makes their deployment and installation difficult. The effective presence of the State in this region and all the basic social services available such as education, health, housing and access to drinking water are therefore still affected by the effects of the crisis. In fact, this is a region where opportunities for the development of agricultural and non-agricultural income-generating activities are limited and access to Water, Hygiene and Sanitation services is fragile. 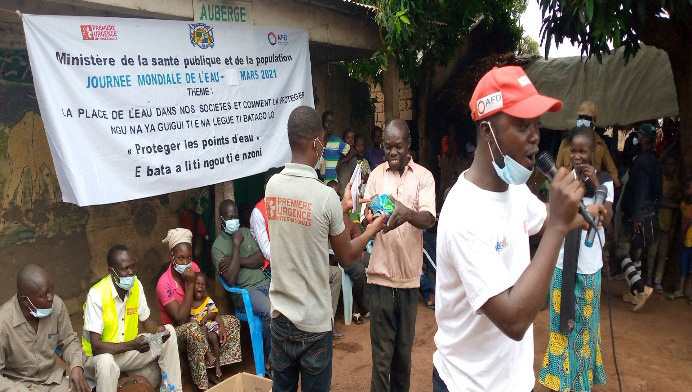 Triangle Génération Humanitaire and Première Urgence Internationale have joined a 4-years project in consortium. The project covers two prefectures of North-Eastern CAR: the Vakaga and the Bamingui-Bangoran. The general objective of this project is to improve the socio-economic situation of vulnerable populations in the North East by facilitating and strengthening their access to basic services, sustainable natural resources and renewed economic opportunities. This will be achieved through the strengthening of state structures and community dynamics and by relying on participatory local development plans.

Triangle Génération Humanitaire is working in Vakaga prefecture, while Première Urgence Internationale intervenes in Bamingui-Bangoran. TGH and PUI develop various activities such as advocacy campaigns with the authorities, and supportto public and parastatal actors in setting up and strengthening basic services. They are also in charge of improving and strengthening sanitary infrastructures, access to water and waste management. On the education field, both NGOs encourage the establishment of protective school environments and propose an accelerated education programme for out-of-school children. They also contribute to the creation of vocational training and literacy schemes for young people who are not professionally qualified Secondly, they are working to strengthen access to production resources and markets for agro-pastoral products. Furthermore, in Bamingui-Bangoran, PUI is setting up alternative economic activities around the Bamingui park. In both préfectures, support is provided for animal health and TGH and PUI are contributing to the revitalization of the prefectural action committee for the monitoring of local development plans. They also support the production and marketing of agricultural output and help to structure existing sales groups and cooperatives.. In Vakaga, TGH encourages the creation and revitalization of businesses. 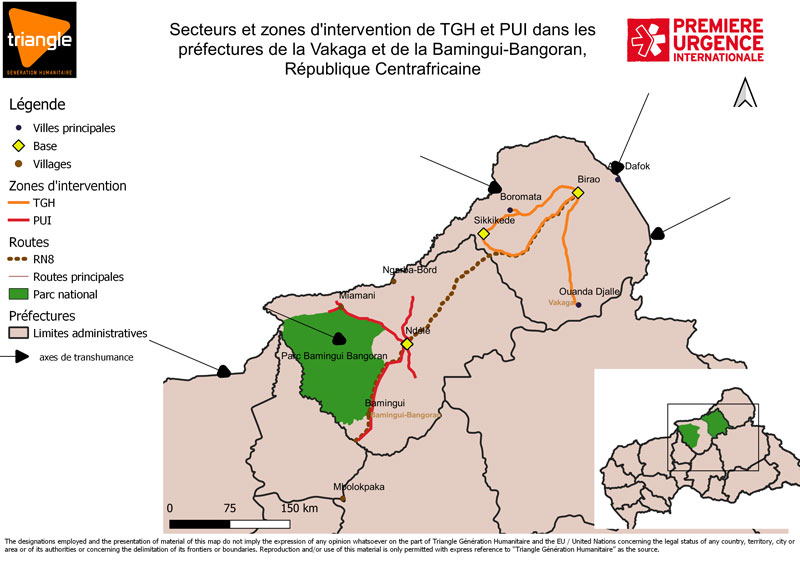 Map of the areas covered by the Iboungbi project. TGH areas of intervention are represented in orange and PUI’s are in red. January 2021 © TGH.