Syria has been the scene of a civil war since March 2011, the extreme violence of which has led to the death of nearly 400.000 people, the displacement of 6.1 million people within the country, and 5.6 million refugees, mainly in neighbouring countries, but also in Europe, making Syrians the largest refugee group in the world. The duration and scale of the conflict has led to the intervention of foreign powers, and the instability in the country has favoured the establishment of terrorist groups. The terrible humanitarian consequences of this situation are still present today: in 2021, 13.4 million Syrians are in need of humanitarian assistance.

The security situation in Syria is still very unstable: fighting continues between the government forces of the Syrian Arab Army of Bashar Al-Assad's regime supported by Russian forces, pro-Turkish armed groups and the Syrian Democratic Forces (a coalition of mostly Kurdish rebel groups that controls the north-east of the country). The Islamic State (IS) maintains a strong presence in the Syrian desert, including the governorates of Deir Ez-zor, Homs, Aleppo, Hama, and Al-Raqqa. Tensions with Israel remain extremely high. Concerned about the growing presence of Iranian proxies on Syrian soil, Israel is launching repeated airstrikes on Iranian-affiliated military targets to counter Iranian influence in the region. Finally, the Turkish offensive launched at the end of 2019 in northern Syria is still causing significant additional displacements of population.

Moreover, since the end of 2019, Syria is hit by a severe economic crisis, which has revealed the structural fragility of its economy and resulted in the rapid deterioration of the population's living conditions. This crisis has been exacerbated by the consequences of the COVID-19 pandemic, which is accentuating the already immense humanitarian needs. The security and health situation is creating restrictions that are complicating beneficiaries’ access to humanitarian assistance.

The regions of Idleb, Hama, Dar'a and Rural Damascus have all suffered heavy destructions during the conflict. The government of Bashar-Al Assad currently controls these areas along with most of the Syrian territory retaken by the Syrian army in 2018, sometimes resulting in more destruction. Only the region of Idlib has not been taken over by the Syrian government and is now controlled by an Islamist armed group (HTS) as well as by forces affiliated to the Turkish army. TGH is working in all four areas to meet humanitarian needs.

In Syria, humanitarian actors’ actions are insufficient to cover all existing needs. There are many obstacles to the implementation of interventions, but regular cooperation with the Syrian Arab Red Crescent (SARC) enables TGH to overcome them as much as possible.

In 2021, 12.2 million people had limited access to water, hygiene and sanitation (OCHA). For this reason, TGH is rehabilitating boreholes and water storage facilities, and replacing maintenance equipment destroyed by the fighting. These vital infrastructures have sometimes been specifically targeted by the fighting forces and are in dire need of repair. Hygiene promotion sessions and distribution of hygiene kits (family kits and women's kits) are also carried out, which is all the more crucial in the context of the COVID-19 pandemic. Since May 2018, TGH response includes water-trucking operations in two IDP centres (now closed) and in 21 villages. Water point maintenance equipment is also provided.

Given the large number of population displacements and protracted conflict situation, many Syrian children have been unable to attend school for varying laps of time. The UN estimate that 6.9 million children and school staff are in need of humanitarian education assistance¹. TGH is therefore active in the field of education in the governorates of Dar'a, Hama and Damascus and rehabilitates school infrastructures to enable young people to return to school. Case management activities are also conducted to identify children in need of psychosocial support. 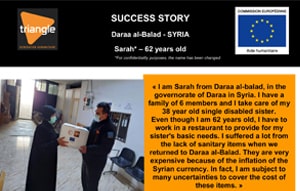 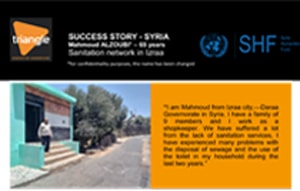 Mahmoud ALZOUBI* – 65 years - Sanitation network in Izraa
*for confidentiality purposes, the name has been changed

Enhancing access to Education in Emergency in Idleb and Hama governorates

The project is participating in enhancing equal access to education services and quality formal and non-formal education for the most vulnerable children and youth in Syria, especially in Hama and Idlib governorates.

Reducing the impact of Syrian protracted crisis by improving access to basic services to vulnerable people in Eastern Ghouta, Hama, Dar’a and Idleb

This project aims to address the needs of conflict-affected people in Syria in a context exacerbated by economic decline and COVID-19 pandemic. The intervention will consolidate the results achieved by TGH in Eastern Ghouta, Hama, Dar’a and Idleb and extend the response to additional localities, identified as highly in need based on their level of destruction, disruption of basic services, and population displacement, with a particular emphasis on areas newly accessible (south Idleb, north Hama) or facing a deteriorating security situation (Dar’a).

Through this project, schools are rehabilitated and conditions are gathered to provide quality education. Protection activities such as case management of conflict affected children and training of teachers are provided in the governorate of Hama.

This project aims to restore communities’ access to water, sanitation and hygiene through sustainable solutions, with a view to mitigating the consequences of the conflict.

This project aims to restore communities’ access to water, sanitation and hygiene services via both emergency and sustainable solutions, as well as restoring access to education for children affected by the conflict, in safe and protective learning environments, and supporting conflict-sensitive educational approaches.

This project aims to stop the spread of the COVID-19 virus amongst the most vulnerable communities by improving access to water and hygiene services. In Eastern Ghouta and the governorates of Dara’a and Hama.

This project aims to restore access to education for conflict-affected children in a protective and secure learning environment while supporting conflict-sensitive educational approaches.

This project aims to restore communities' access to water, hygiene and sanitation through emergency mechanisms or sustainable solutions in order to mitigate the consequences of the conflict.

This project aims to provide assistance and protection to vulnerable populations in Eastern Ghouta and Hama Province, addressing acute needs in the terms of access to water and sanitation.

This programme provides WASH services that meet minimum standards and address the specific needs of underserved populations in the Hama Region.

This programme provides WASH services that meet minimum standards and address the specific needs of underserved populations in Eastern Ghouta.

This programme provides WASH services that meet minimum standards and address the specific needs of underserved populations in Eastern Ghouta.