Since 2003, Iraq has faced a succession of crises and conflicts that have severely affected the population. Since 2014 and the emergence of the Islamic State (IS) in the northern and western areas, the security situation has considerably deteriorated. Part of the population had to flee, either in internally displaced persons’ (IDP) camps or abroad. Other stayed and had to live for several years under the occupation of the group. In 2016, the Iraqi government regained possession of the entire country, but it is still facing many structural issues.

On October 1st, 2019, large-scale social protests erupted in Baghdad and then spread to the south of the country. Initially focused on specific issues such as youth unemployment, poverty and corruption, the demonstrators' demands gradually shifted towards a general desire to overhaul Iraq's socio-political system. Several hundreds of demonstrators were killed due to the repression of the demonstrations by the security forces. The protests were constrained by the COVID-19 pandemic and the establishment of a new government in May 2020.

Iraq is now facing new challenges, including economic and socio-political ones. These challenges must be addressed in order to build a lasting peace and to ensure the security of a divided country, marked by the aftermath of chronic wars. Furthermore, Iraq is the battleground of competing countries, in particular the United States and Iran. During Donald Trump’s presidency, the Iranian-American relations deteriorated. Indeed, Trump applied a policy of maximum pressure against Iran, illustrated by the withdrawal of his country from the Iranian nuclear agreement (JCPOA) and the assassination of Iranian General Qassem Soleymani in Baghdad in January 2020. This tension is expressed in Iraq where Iraqi bases housing American forces are regularly attacked by Iraqi militias supported by Iran, destabilising the country.

In total, nearly 6 million Iraqis have been displaced by the conflict since 2014¹, when ISIS took Mosul. As of 30th September 2021, almost 1.2 million Iraqis were still displaced across the country². They have sought to refuge in camps located mainly in the Governorate of Nineveh, near Mosul, as well as in urban areas, particularly in the Iraqi Kurdistan Region. In addition to these displaced population, refugees from neighbouring countries, mainly from Syria, also seek refuge in Iraq. Insecurity, lack of infrastructure and living conditions deteriorated by the conflict are protracting the exile of displaced populations. Nevertheless, the Iraqi government is today implementing a policy of camp closure and encouraging return. Indeed, in 2021, more than 4.9 million Iraqi people went back to their areas of origin². However, for the returns to be durable and not feeding conflicts, it is necessary that they come with measures allowing access to basic services and livelihoods.

Social and community equilibrium have been severely weakened by the conflict, with a predominant Shia population, a Sunni minority, often perceived as ISIS supporters and other minorities (Yezidis, Christians and many other groups) severely affected by the conflict. Divisions are deep and segregation along community lines is a reality in conflict-affected areas. Despite the recovery of the entire territory occupied by ISIS, dormant cell maintains instability in some areas. Furthermore, former conflict areas remain in a precarious situation: mined land, destroyed homes and buildings, lack of infrastructure and basic public services.

In these circumstances, access to formal education is very limited for many children. Many of them are at-risk and require protection. Difficulties resulting directly from the conflict are adding to the frailty of the educational system, the distance from schools and school fees. The loss of administrative and legal documents, particularly common in conflict situations, prevents access to public services, including education.

50% of schools have been destroyed in the governorates affected by the fight against IS. For the many children who have been out of school for five years or more, reintegration into the mainstream school system is difficult. The majority of out-of-school children are adolescents whose distress is reported by parents and social workers. This population is subject to social marginalisation and is particularly exposed to child labour, early marriage, recruitment into armed groups and is at risk of radicalisation.

In addition to its child protection activities, TGH is implementing national capacity building for actors involved in child protection, especially the Ministry and the Department of Labour and Social Affairs (MoSA/DoSA). TGH has played a significant role in the development of child protection guidelines in both Iraqi Kurdistan and federal Iraq.

TGH adapts its protection actions to the needs of the population who, following camps closure, are returning to their areas of origin. These returnees are facing new needs and have to develop sustainable livelihoods in order to resettle in a dignified and sustainable manner. To this end, TGH provides, through several projects, vocational training to enable returnees, particularly young people, to develop livelihoods, with for example business creation activities. These trainings are equally offered to non-displaced populations in order to respond to their needs, and to avoid creating tension, while promoting social cohesion. 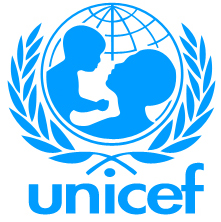 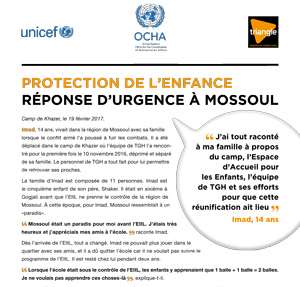 "I told my family everything about the camp, the Child Friendly Space and TGH team and their efforts to make this reunification happen"

Skills Development and Innovative Engagement for Young Boys and Girls from IDP, refugee and host communities in Duhok

Young people in the city of Dohuk have access to vocational training through a youth center so that they can develop job skills and in the long term support themselves by gaining access to employment.

The project provides capacity building and material support to Halabja hospital for the treatment of victims of chemical weapons. TGH supports the Mental Health department with material and expertise through the project. It also aims to strengthen the coordination between the hospital mental health department and the Department of Social Affairs (DoSA) in Halabja.

This project is the second phase of a livelihood support project for returnees and host communities in the Sinjar region. Through the establishment of a digital catalogue for the distribution of inputs and other agricultural material, this project creates favorable conditions for the sustainable return of 450 households to their area of origin.

Youth in the city of Mosul have access to vocational training through a youth center so that they can develop job skills and in the long term support themselves by gaining access to employment.

This project aims to strengthen child protection case management systems in Iraq. TGH is reaching this objective through the capacity development and system strengthening of governmental institutions and national NGO, in Kurdistan Region of Iraq (KR-I), Ninewa and Central/South governorates.

Economic recovery of micro-entrepreneurship and agriculture in Hamdaniya District

This programme facilitates access to funding and the rehabilitation of infrastructure related to agriculture, and strengthens social cohesion to contribute to economic and agricultural recovery.

The project aims at providing culturally appropriate and gender sensitive child protection services to improve departure-affected children's protective environment, well-being, resilience and access to their rights as well as their families’.

This project falls within the frame of dynamics of reconstruction and relaunch of activities in the district of Sinjar. It aims to improve the agricultural production of young men and women, strengthen the food security of the most vulnerable families and encourage the dynamics of return to the region.

This project is the continuation of previous TGH’s projects strengthening Child Protection and Child Protection Management. It aims to reinforce child protection practices in the main institutions and support social workers both in Iraq and Kurdistan.

TGH Iraq mission has been providing much needed protection and livelihood services to children and families since 2013. TGH has been here through the Mosul crisis, the defeat of ISIS, and has maintained its steady presence and support to the vulnerable children and families in Federal Iraq and Kurdish Region of Iraq.

Contribution to the improvement of child and family protection

The project aims to provide culturally appropriate child protection and legal services to Iraqi children and their families, taking into account the age and gender of children affected by the conflict, while strengthening community-based risk prevention and response mechanisms.

Work towards greater availability of child protection services and mechanisms to combat gender violence, both in the prevention of and response to such violence, including in emergency and post-emergency humanitarian situations.

To improve the availability of drinking water and irrigation water, TGH is paying more than 400 residents to build water catchment structures on the slopes of the Sinjar Mountains to recharge groundwater levels.

This programme strengthens child protection case management systems in Iraq (MoLSA and DoSA) and the capacity of social workers in the governorates of Baghdad, Nineveh, Erbil, Dohuk and Souleymanieh, as well as the Legal Clinic Network (LCN) of local NGOs based in Baghdad.

This programme improves the environment, well-being, resilience, healthy development and access to rights and learning opportunities for children affected by conflicts. It applies static or mobile approaches depending on the context.

This programme addresses child protection issues in Iraqi IDP camps through individualised follow-up, psychosocial support activities, awareness campaigns and the establishment of community centres for children, adolescents and their families.

Supporting the resilience of the most vulnerable pastoralist households

The overall objective of the programme is to improve the general health status of livestock and reduce the animal mortality rate by developing a free and mobile veterinary care unit in the district of Tilkaif.

The main objective of this programme is to strengthen the internal systems and capacities of social workers from local NGOs and the Department and the Ministry of Labour and Social Affairs (DoSA & MoLSA), and to improve coordination and communication between DoSA/MoLSA and non-governmental actors.

The professional integration and psychosocial care for children and adolescents

Establishment of a community centre in the underprivileged neighbourhoods of Mosul East to support the stabilization, social cohesion and professional integration of young people.

The overall objective of the project is to maintain essential child protection services provided by the TGH teams to displaced populations living through individualised follow-up, psychosocial support activities, and awareness campaigns.

Ensure immediate protection for conflict-affected children in the camps, facilitate and provide them with priority access to psychosocial services through dedicated mobile and static units and the strengthening of local and community capacities.

This project aims to mitigate the multiple factors that constitute barriers to access to education for children and adolescents in the areas recently taken back from Daesh, by proposing activities adapted to the specific problems of the different children’s profiles.